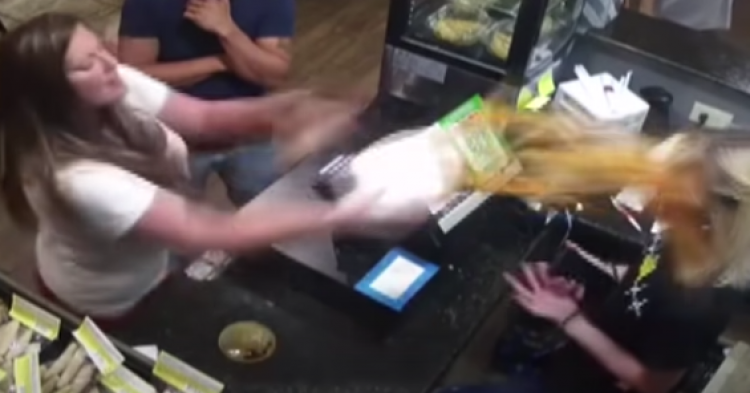 Restaurant managers need to have a variety of skills. Not only must they know how to delegate tasks to servers and cooks, but they also need to be able to deal with customers. Sometimes customers get furious when they perceive that they’ve been slighted. Rarely are managers met with compliments about the restaurant or the staff employed there. A clip caught on a surveillance camera caught the moment a furious customer threw soup in the face of the restaurant manager, and now people are jumping at the chance to engage in a conversation around the issue.

The woman’s complaint was that the soup was too hot. Allegedly, the soup burned the top of the container used to deliver the soup. According to police, the customer threw the hot soup into the face of manager Jannelle Broland to get revenge on the restaurant for serving hot food to the customer. The woman had already cursed Broland out on the phone. The manager had tried to deal with the situation by offering the customer a free soup as a replacement. Nevertheless, it was not enough to make the furious customer calm down.

“All she wanted to do was yell and cuss,” Broland said in her video. “She called me names and the kitchen staff names. I told her, ‘Ma’am, I can still help you. All I’m asking is you do not yell and curse at me.’ She says, ‘Oh no, honey, you haven’t heard attitude yet, and I will talk to you any which way I f—ing want. I said, ‘No ma’am, you will not,’ and I hung up the phone.”

The woman called back but hung up when she was placed on hold while waiting to speak to the manager. She later returned to the restaurant to complain in person. Although Broland offered a refund or replacement for the soup, the customer didn’t want to hear about it and just wanted to yell and scream and cause a ruckus.

“I said, ‘If you do not leave or calm down, I’m going to call the police,’ and she said, ‘I don’t give a f—. … I said, ‘Ma’am, I can still help you. I just need you to not curse and yell at me.’ That is when she made the split decision to grab (the soup) and throw it in my face,” said Broland.

Fortunately, the soup wasn’t super hot. However, it was spicy, which caused pain.

“It was still pretty warm, but if anything, the spices from our soup definitely affected me more than anything,” she said. “It really felt like I had just been pepper-sprayed. My eyes were burning. My nose was bleeding.”

“We do not condone this type of behavior and hold our citizens to the highest standard,” Temple Police Deputy Chief Allen Teston said. “If a citizen believes they have received poor service, we advise them to remain civil until the problem is resolved.”