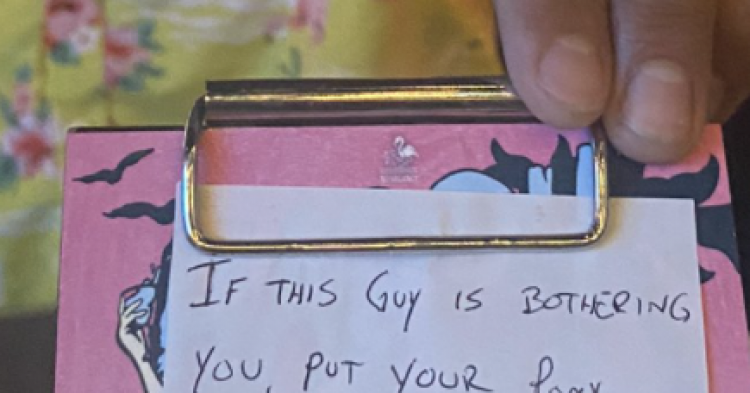 A woman is singing the praises of a bartender in St. Petersburg, Florida, after he figured out a clever way to save her from harassment. The young woman, who tweets from @TrinityAllie, shared a picture from the June 13, 2021 incident where the bartender gave her a small note on a clipboard that was disguised as a receipt – and it helped save the young woman from a potentially dangerous situation.

“If this guy is bothering you, put your ponytail on your other shoulder, and I will have him removed,” the note said. 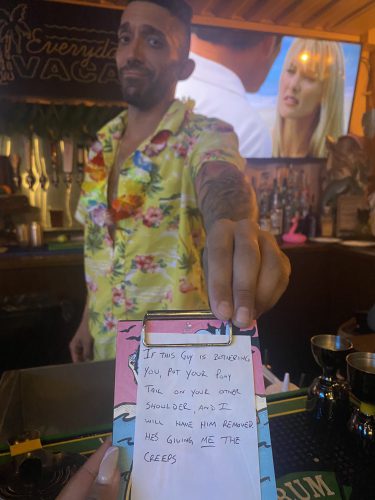 When the young woman shared the image to Twitter, it was shared by other users another 47,600 times and counting. She also shared a little more details about why the note was so important to her at the moment.

“This man was harassing me, and my friend and the bartender passed this note to me acting like it was my receipt,” the woman wrote. “Legit the type of bartender everyone needs.”

Four days after the tweet went viral, the bartender came forward to identify himself by replying to the message. His name is Max Gutierrez. He works at No Vacancy, a bar, and restaurant in Florida.

The tweet that went viral included a photo of the man who was bothering the women as well as the following note: “This man was harassing me, and my friend and the bartender passed this note to me acting like it was my receipt! Legit the type of bartender everyone needs.”

She added, “He ended up having to literally yell at the guy he said ‘you need to get away from these girls who clearly are not interested’ & the dude said ‘that was a little aggressive’ and he said ‘well you’re aggressively hitting on them & you need to leave.’”

Later, Gutierrez turned up to Reddit to explain that he noticed the man in question “giving off weird vibes.” Because he was a kind person, he “kept an eye on him” and “gave him a chance” before confronting him and yelling at him to leave No Vacancy.

“I honestly don’t like yelling at customers or embarrassing people, but I find it’s one of the best ways to handle creeps,” the comment said. “I just don’t need my guests feeling uncomfortable.”

Twitter users praised Gutierrez and the way he handled the situation.

“HERO!!!!  We need more people to stand up when they see such actions!  These two ladies were very lucky to have this bartender!!”

“Aww, amazing story, and it is all over the online news here in the UK too!! I think you should come on our Breakfast/chat shows over here and talk about it some more 🙂 there definitely need to be more lovely people like him looking out for us girls and kicking out the wrong ones.”

“I hate guys who harass you and then act like YOU’RE the one out of line when you blow up at them.”

The incident in St. Petersburg, Florida, has been a source of inspiration for people on Twitter. Many were delighted to see the bartender sticking up for the women.